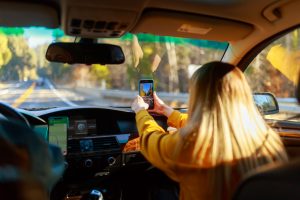 Most drivers would be unaware of an obscure rule that exists in NSW which gives police the power
to issue a fine to drivers whose passengers engage in certain behaviour that has the potential to
distract the driver.

Driver distraction is a leading cause of motor vehicle accidents in Australia. According to Transport
NSW, research shows about 14% of accidents involve the driver being distracted by something inside
or outside the vehicle with 1 in 10 fatalities caused by driver distraction.

Rule 299 of the NSW Road Rules states that a driver must not drive a vehicle that has a television
receiver or visual display unit in or on the vehicle operating while the vehicle is moving, or is
stationary but not parked, if any part of the image on the screen is visible to the driver from the
normal driving position, or is likely to distract another driver.

An example of this offence would be if a person was sitting in the front passenger seat using a
laptop, tablet or mobile phone to video message another person via Facetime and the image on the
screen was visible to the driver.

However, the rule does not apply if the device is being used as a driver’s aid and it is an integrated
part of the vehicle’s design or is secured in a cradle that is mounted to the vehicle.

What is a driver’s aid?

If you believe there has been a mistake, or there are other reasons or special circumstances that
contributed to the offence, you can request a review by Revenue NSW or elect to challenge the
offence in court. You have 28 days to take the matter to court.

However, you should bear in mind that if you elect to have the matter decided in court the
maximum penalty the court can impose is a fine of $2,200.