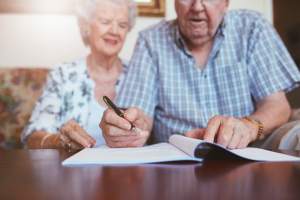 It is not uncommon on the passing of a loved one to find that they had typed up or hand written
their own version of a document outlining their testamentary wishes.

A problem for those left behind arises where the well intentioned deceased failed to prepare a
document that complies with the strict formal requirements for preparation and execution of a last
will and testament as dictated by the Succession Act 2006 (NSW) (“the Act”).

Where the document prepared fails to comply with the requirements of the Act, there are
mechanisms pursuant to section 8 of the Act for the Court to overlook such shortcomings, if the
Court is satisfied based on the evidence put before it that the document prepared was intended by
the deceased to form their new will, or to alter or revoke a previous will in full or in part. This is
known as an Informal Will.

This shouldn’t be read as a suggestion that people should just slap together a document at home, as
recent cases have shown that it is not always easy to convince the Court to accept an informal
document.

While it is a decision from the Victorian jurisdiction, the Court recently made an interesting decision
in the matter of  Sultanova v Bolgarow [2019] VSCA 245 in finding that an informal document
embodied the testamentary wishes of the deceased.

The document before the Court had been prepared by a solicitor for their client, with the contents of
the document then summarised to the client and the client confirming to the solicitor that the
document sounded like it was “exactly what she wanted” and was “settled”. The final document was
never signed by the willmaker before her decease as the solicitor was unable to see her before she
passed. This was an unusual case as the document was never seen, read by the client nor read to the
client, but was still found to embody their wishes as an informal will.

However, this decision must be contrasted to the recent decision of the Supreme Court of NSW of
Re Estate Miruzzi, deceased [2018] NSWSC 1899. Similarly, a client gave instructions sufficient for a
will to be prepared, but cancelled their appointment to sign the document due to illness, from which
the client never recovered and passed away before being able to attend an appointment to sign off
on the document.

In this case the Court was not convinced that the client’s instructions and failed attempts to attend
to sign the document were satisfactory to confirm an intention that this document was intended to
be adopted as their will.

While both cases have very similar facts, comparing the decisions in two cases shows that it is
difficult to be certain whether a Court will find that a document shall be treated as an Informal Will
where it fails to comply with the formal requirements of the Act.

Due to the important nature of a last will and testament, it is prudent to ensure that the document
prepared will be accepted, so that the wishes of the deceased are able to be followed by those left
behind. Care should be taken to ensure that any uncertainty is avoided by preparing a last will and
testament in compliance with the Act and that proper legal advice and guidance is sought.